Anglo American Plc plans to exit its South African thermal coal business within the next three years by spinning off the unit as the miner accelerates its retreat from the dirtiest fuel.

Anglo has been increasingly vocal on its plans to stop mining thermal coal in the past year, but has so far given few details. Today’s comments, in a written response to shareholder questions, provide a clear route to the exit.

The company said it’s working toward a possible demerger of the South African coal business as its preferred exit option. The unit could be listed on the Johannesburg Stock Exchange within the next two to three years. Still, Anglo said it will consider other options, such as a trade sale.

Anglo has spent decades positioning itself as an environmental and social champion, from treatment plans for employees with HIV or tuberculosis, to developing new ways to mine with less water. Yet it has risked getting left behind on thermal coal, after Rio Tinto Group sold its last coal mine in 2018 and BHP Group looks at options to exit the business.

Earlier this year, Chief Executive Officer Mark Cutifani said the company wants to get out of the business within the next few years.

“We believe that the long term prospects of our thermal coal operations in South Africa may be best served under different ownership,” Anglo said in the comments posted Thursday.

Some large investors have taken a stance on thermal coal. Norway’s $1 trillion wealth fund said it would stop investing in companies that mine more than 20 million tons a year of thermal coal. BlackRock Inc. said earlier this year it will cut exposure to the fuel, although its approach wouldn’t affect holdings in some big producers including Anglo American.

Anglo, which has already dramatically reduced the amount of thermal coal it mines in recent years, has two remaining businesses producing the fuel in South Africa and Colombia. 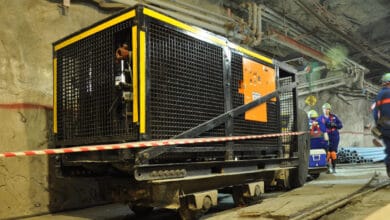