The $10 billion refinery, set to be one of the world’s largest and process 650,000 barrels of crude a day, should be near full capacity by mid-2020, Edwin Devakumar, group executive director at Dangote Industries Ltd., said in an interview at the coastal site, about an hour’s drive east of Lagos.

“People still have difficulty believing we can do it on time and within those costs,” Devakumar said Wednesday. “But we believe we can. It’s something of the size that’s rarely been done before. It’s huge.”

Dangote, worth $12.2 billion, according to the Bloomberg Billionaire’s Index, has said the refinery can transform Nigeria by weening it off fuel imports and generating foreign-exchange through exports. Despite being Africa’s biggest crude producer and an OPEC member, the West African nation ships in almost all its gasoline and diesel from abroad because of the decrepit state of its government-owned refineries.

Dangote’s facility will probably produce about 50 million liters a day of gasoline and 15 million liters (3.96 million gallons) of diesel, though output can be changed according to the demand for each product, Devakumar said.

While Nigeria, a country of almost 200 million inhabitants, currently consumes about 35 million liters of gasoline daily, Dangote can export whatever surplus it produces, Devakumar said.

“Once we start producing, we’ll be able to meet all local demand and we’ll also be able to start exporting,” he said. Devakumar

The company has been in talks with oil traders including Royal Dutch Shell Plc, Vitol Group and Trafigura Group Pteabout supplying the refinery with crude and buying refined products, according to Devakumar.

“We are establishing a rapport with them, but there’s been nothing specific so far,” he said. “We’re flexible in terms of our feedstock. We’ll be able to use all the African crudes, American crudes and Middle Eastern crudes. We don’t want to be dependent on Nigerian crude. We won’t be able to process heavy, dirty crudes. It doesn’t make sense in today’s environment.”

Trafigura confirmed discussions had taken place. The new refinery will benefit “the West African oil market and improve fuel standards in the region,” a spokesperson said in an emailed response. Antonia Lock, a spokeswoman for Vitol, declined to comment, while Shell spokesman Bamidele Odugbesan didn’t immediately respond to a text message.

Dangote will start producing its own oil, partly to supply the refinery, within a few months. It aims to pump around 20,000 barrels a day from two shallow-water blocks, known as OML 71 and 72, located in the Niger River delta in southeastern Nigeria.

“We will continue to invest in upstream,” Devakumar, 61, said. “We may look for more blocks to produce up to 250,000 barrels a day. It’s where the majority of our cash flow from the refinery will go to. We’ll focus on that after we start the refinery.”

A fertilizer plant, located near the refinery, will probably be producing its first batches of urea by the end of this year, Devakumar said. Costing around $2.5 billion and with a capacity of 3 million metric tons a year, it’s set to be one of the biggest globally.

“We can export a lot of fertilizer too,” he said. “It can meet the demand for most of Africa.”

While Dangote took on a $3.3 billion syndicated loan, which Standard Chartered Plc arranged, most of the refinery and fertilizer projects are self-funded. Both units will probably be partly sold via initial public offerings eventually, Devakumar said.

“We’ll go for listings, as separate companies,” he said. 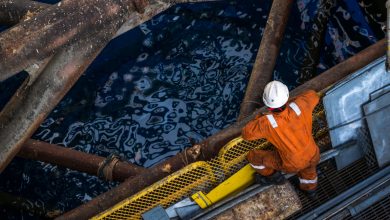