De Beers sold the most diamonds since April in a sign the industry is starting to recover from a slump in demand last year, though the market will require more evidence of a sustained rebound.

The Anglo American Plc unit sold $545 million of diamonds in its first sale of the year, traditionally one of the strongest buying periods as the industry restocks after the crucial holiday selling period.

There was little good news for the diamond industry last year. An oversupply of rough stones, a surfeit of polished gems and falling prices piled pressure on the companies that mine diamonds, as well as the lower-profile businesses that cut, polish and trade them. The results from the sale last week will encourage some in the industry that things are improving.

“Continuation of De Beers’s sales recovery is a positive sign for the rough diamond market, which we expect to recover in 2020 supported by reduced diamond supply and midstream destocking,” said Kirill Chuyko, chief strategist at BCS Global Markets.

There were other positive signs from the sale. De Beers slightly raised prices in some categories, especially larger stones, according to people familiar with the situation. Margins also recovered in the so-called secondary market — where buyers sell to gem manufacturers who don’t have direct access to De Beers. That meant buyers were able to make a profit on boxes they sold on, the people said, asking not to be named as the process is private.

A lack of profit for the diamond midstream, the industry’s link between African mines and jewelry stores in New York, London and Hong Kong, forced De Beers to make major concessions last year as buyers balked at the prices being asked.

While the improved demand at the latest sale is a positive sign, industry participants will want to see a more prolonged recovery. After rough diamond sales slumped in the second half of last year, manufacturers are low on inventory and were compelled to restock or face having to shutter factories. Polished diamond prices have edged higher since bottoming in December, but there is still little sign of a sustained recovery.

“Rough price increases in the market are likely a combination of better polished sell-through and the need for more manufacturing stocks,” said Anish Aggarwal, a partner at specialist diamond advisory firm Gemdax. “It’s too early to tell the weighting of these factors.”

De Beers sells its gems through 10 sales each year in Botswana’s capital, Gaborone, and the buyers — known as sightholders — generally have to accept the price and the quantities offered. The sightholders are given a black and yellow box containing plastic bags filled with stones, with the number of boxes and quality of diamonds depending on what the buyer and De Beers agreed to in an annual allocation. 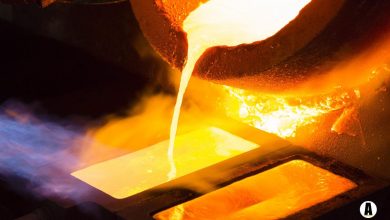