Exxaro, one South Africa’s largest black-empowered mining companies, today completed the second phase of the Bonginhlanhla Primary School Infrastructure Project, in a ceremonious handover to the Mpumalanga Department of Education and the community Kriel.

What began as a public-private partnership between Exxaro, Seriti-Kriel Colliery and Eskom, has since turned into an initiative that has greatly impacted primary school learners. Phase 1 of the project was completed in June 2019, whereby Seriti handed over their phase of the project to the Mpumalanga Department of Education. Exxaro then stepped in for phase 2, contributing R10 million towards the construction of 3 classrooms, a computer centre, a laboratory, a library and the provision of furniture.

Sibongamandla Construction was appointed for construction activities and commenced work on-site in June 2019. What’s more, during phase 2 of the school project, 36 temporary jobs were created as well as 2 business opportunities for local SMMEs.

During the handover, Exxaro CEO Mxolisi Mgojo said, “How do we become a blessing to future generations as we have been blessed with this resource? We want to plant the seeds for the next generation like our liberation leaders did for us to exist. Therefore, our purpose has to be powering better lives. Today’s event is a small demonstration of how we value the foundation that education brings to society.”

As a project partner, “we would also like to confirm a pledge of yet another R10 000 000.00 contribution by Exxaro to assist with the completion of this education infrastructure project in collaboration with the Mpumalanga Department of Education,” Mgojo added.” 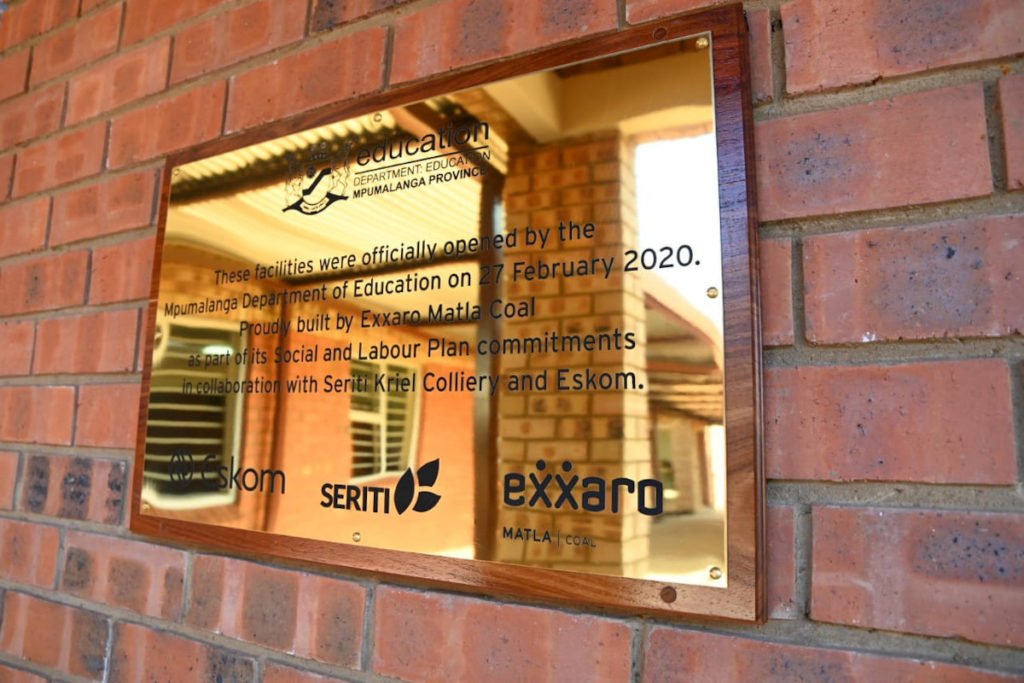 During his address, Mpumalanga Department of Education MEC, Bonakele Majuba expressed his gratitude to Exxaro and its project partners for the work that they are doing within the Kriel community. “This is testament of how private company and government can work to succeed in projects that benefit communities. Exxaro has made great strides in investments that ensure the delivery of quality education and we thank you for the additional 10-million-rand pledge. These contributions will benefit the current and future generations.”

The Bonginhlanhla Primary School project team, residents of the area and schoolchildren, who will have the opportunity to utilise the newly constructed facilities, were also in attendance.

Socio-economic development has always formed part of Exxaro’s DNA. In addition to the infrastructure-focused project, the mining company has various other initiatives in place that encourages sustainable growth for its host communities.

Over and above the phase 2 scope, Exxaro is currently finalising plans to erect a fence around the school parameters to promote safer and more constructive working conditions for learners.

The Bonginhlanhla Primary School project is one of the many ways Exxaro strives to achieve its primary objective of powering better lives in Africa and beyond.