Tanzania is bracing to power future electric cell driven vehicles through mass production of graphite minerals, with four such factories in line to be built in the country.

That came to light in the Mirerani Hills on Thursday, during the official tour of the Minister of Minerals, Ms Angela Kairuki, who inspected the first graphite mining and processing plant located at the foot of the mining hills.

The Director of the maiden graphite producing establishment, Mr Godlisten Mathew Mwanga, revealed that the God Mwanga Gems Limited has started operation in Mirerani, focusing to churn out around 30,000 tonnes of graphite per annum and counting.

“We plan to establish four graphite producing plants, three in Mirerani, with the first already in operation and another in Tanga,” said Mr Mwanga, adding that the maiden factory is already employing 80 workers, though only two of them are female.

“The future of transport technology entails electric cars or hybrid vehicles, whose active cell components are made from graphite,” said the Director, explaining that with proper arrangement, Tanzania can play major role in powering future mode of machinery conveyance.

Graphite is a crystalline allotrope of carbon, a semimetal, a native element mineral, and a form of coal, regarded as the most stable form of carbon under standard conditions, used in thermochemistry as the standard state for defining the heat or formation of carbon compounds.

The Commissioner of Minerals, Engineer David Mlabwa, said the government was working to enlist all mining operations in the country in order to formalise all activities for proper revenue generation.

He cited the case of ‘Green Garnet,’ mining in Simanjiro, saying while small-scale miners who are involved in the activities claim they were still scratching the surface, the State feels it is high time this sector also get enrolled for taxes.

The Minister of Minerals, Ms Angela Kairuki, said the government has earmarked 44 different, new locations for mining that will soon be allocated to artisan miners, once proper arrangements to that effect have been made.

“We are waiting for the Geological Survey of Tanzania (GST), to survey the proposed mining areas to ensure that, they can indeed yield valuable findings before we can hand over the plots to miners,” said the Minister.

GST is the government agency responsible for the acquisition and storage of geoscientific data and information used in the mineral resources sector and other sectors of the economy and active in promoting mineral exploration and mining. 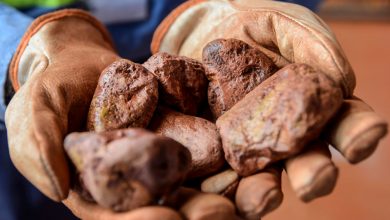